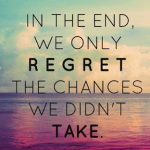 It is clear that we have reversed our life in 2015/2016 with our departure to Ibiza. The Cosmos was in a good mood and the move ran like clockwork. Our goal was very rosy, we wanted to have a thriving practice within half a year. Of course we knew that this was a very ambitious plan. No one knew who we were on Ibiza, indeed … bioresonance … What is that??!! So I threw myself on the marketing. That this worked was clear after a short time. People saluted us, and we didn’t know who they were. Once in conversation came the fame of the marketing strategy. In short, marketing works for the brand recognition, so that we continued.

Yet, the practice grew not as fast as we would like. That brought two things. One, a house in the countryside is very quiet. Good if you have a busy practice, but too quiet if you don’t have people around you, and as we were used to have. The second is of course that there is no money coming in. To overcome both points we have set up the B&B. Never thought I would do this. Purely because in the Netherlands you cannot imagine how life is on Ibiza.

We decided to do so a season, just to see if we would like it after that decide whether we would do another season. 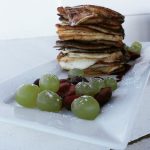 Well, we definitely do this another season! What fun it was! All people do have their story, what is so interesting. Interesting because our profession helps, of course. It is because we just like people and genuinely interested in their way of life. The breakfasts were also fun to make, especially as this was outdoor served and so not in our private atmosphere. Because that is the big difference with the Netherlands. We live outside! That is pretty much the whole year round, not a day goes by that we can not go out without coat and in the sun! On a year view, sitting inside the house, will at most be 1 or 2 weeks. So your living space suddenly becomes much bigger and then a B&B is not at all such a breach in your private life. That was a revelation to us. So this year we happily continue with the B&B.

In former days in the Netherland I used to say.:” I want to be a fly on the wall to watch you and to see where it goes wrong at home”, and I often said “if you only could stay with us for a week, than your problem was solved”.

In the Netherlands we had, in our view, not that possibility.

Here we have started the “pamper week” or the “retreat”. This after we have had a “practice week” with an old client of us. In that week we brainstormed with her.  She felt so good after that week that we wanted to offer this to several people. And so the retreat was born. 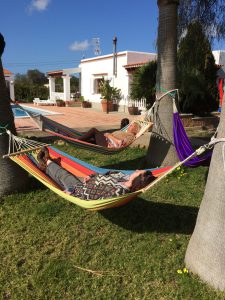 Of course this was again a concept that is so new that people not immediately popped in to it. Especially since this is actually a project for the winter. After all, you are here to get your life back on the ride. You’re not here for the beach and the nightlife.

This is growing slowly too. It started with quite a lot of interest of people and because it is a scary idea is, we did not get bookings at once.

Imagine….two therapists, all alone for you, together in one house (villa) …together at the breakfast table…in winter … brrrrr..so scary..

What if it doesn’t click … than you will be in that villa for a week with complete strangers ….

Sure that is scary, no escape (so you think). Nothing is less true!

The ones who now have experienced such a week, are extremely satisfied. After all, it is called “therapy on request” … we’re going as fast as the client wants to go or can go. There is the possibility for an escape every day. When you need some space, you will get it!

When you want to escape to the atmosphere there is a rest day, whenever you want to. Everything is possible, precisely in order to give the client the growth they need. A very warm bath, in which you feel at home. We are experienced therapists who see what you need and will give that to you.

I was expecting it would be a success, but that it would be such a great experience, that I could not imagine. So this we certainly do next year.

As most everyone of our clients know,  I’m creative. I had the goal to set up a shop on Ibiza, at home. Very timid I started by it 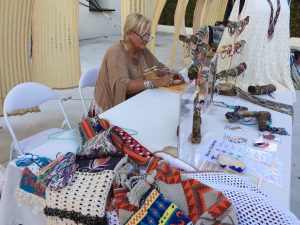 during the B&B. Just putting down my stuff and see if there are any questions about the things. Exactly like I am with my selfmade goods … in a corner between the rubbish! And yet there were questions about it. “Do you sell those too?” … and I answered … ehh Yes.. pretty much … would you like coffee???? Hahahaha that is obviously not the way to start a sale.

Quite unexpectedly I was asked by someone who knew I was so busy with jewelry, on a market at her home. This was a Christmas market at the beginning of december. I decided to do so, and when that trepidation was away I came across rapidly. Yet I have been on two markets. I have a place in the winter at the sunday San Joan market  and there are two stores interested to sell my stuff.  Also upcoming is a huge fashion show in the spring and probably in the fall, with my jewellery as an eye-catcher too.

So there is no shop at our house, but BohiniFashion is already on the map!

To well to say that financially it was a particularly great year … No, nothing of that. We have lost some money on our way. But everything around it to make 2017 successful, also financially, is presentl! Everything we had in mind is well launched and rolls like a steam train. Not fast, but steadily and its on his way!

Now we are going to a very positive 2017 and we wish for every known acquaintances and the (still) unknown,

a fantastic new year where all your dreams may come true!

Don´t you know how to manage a bright and good 2017. … we do! Come and stay a week (retreat) and you will get the key of your success with you back home!